Another Anglo-French Dispute, at Sea

My apologies for the long absence. I have been reading and trying to devise a way to simulate Victorian era "ship-vs.-fort" rules....to no avail! Anything that gives the ship a reasonable chance at damaging the fort seems to "over value' the ship; while anything that does NOT do that, doesn't make for much of a game.   Bob Cordrey has been working on the same problem lately at Wargaming Miscellany. I wish him better success than I have had!

While "of the web" I have been painting some of the models from my shipyard. Last week I went to work on twelve that were built for the "Ironclad Draughts" game by Richard Brooks, Nigel Drury and Bob Cordery(available from Wargames Developments). The Older pre-Dreadnaughts are painted in pre-war French and British colors. My opponent is my young friend Carlos, playing his first semi-historical game.  we are using the latest version of Bob's PORTABLE NAVAL WARGAME. 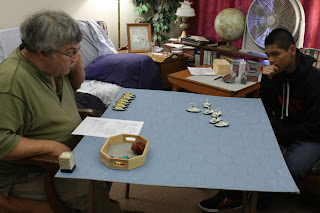 The first turn sees Carlos move most of his ships to my right, while sending the other across my path. He lands an early long range shot on HMS Collingwood 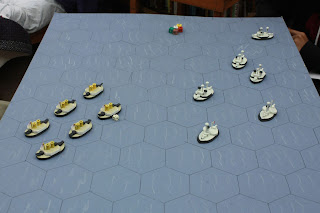 The second turn sees both fleets concentrate fire on the few vessels in range. Coolingwod and Admiral Baudin take some serious hits. 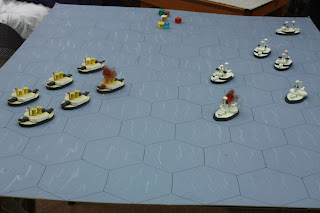 I move first, trying to get as many broadside shots as possible. Carlos boldly closes with my fleet. At the close of the next turn's firing stage, two vessels on each side are so damaged as to try to leave the action. Carlos, while giving away his broadsides, DID get in position to launch two successful attacks with bow torpedoes. 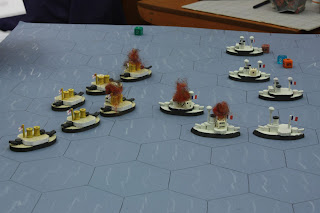 Collingwood and Benbow leave the battle, covered by the rest of the fleet. Close range broadsides continue to do damage. 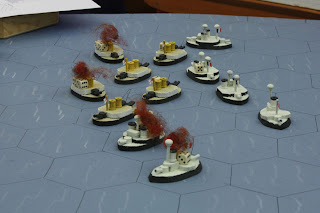 Caiman and Requin sink as the battle rages on.  Still, the French continue to batter the British squadron. HMS Anson takes an amazing round of punishment (Carlos rolled three 6's on a close range bow shot!) 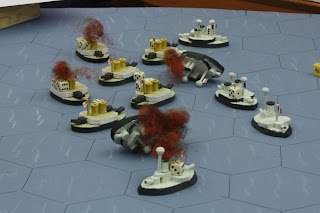 Anson and Baudin trade parting shots as they steam to extreme range. Baudin slides beneath the waves. The Terrible also succumbs to another British broadside. 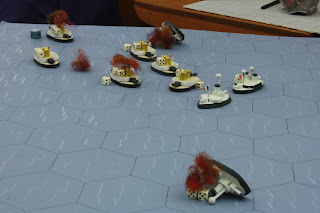 As the British fleet pulls away, the Rodney is pummeled , and sinks. Indomptable also goes under, leaving the Freanch with only the Formidable afloat. 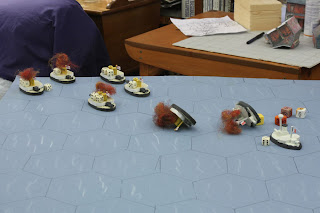 The battle ends, with the British press claiming a great victory, five French ships sunk for one British ship lost.  At the Admiralty, more sober minds see one lost, and four battered to such a point that they will not see action any time soon.  The smallest swing of fortune could have seen far worse losses for the British fleet....

GAME NOTES: Bob Cordery's  PORTABLE NAVAL WARGAME is in a much nicer format than Memoir of Battle at Sea. It made teaching the game to Carlos  far easier.  The entire game took less than thirty minutes.  I promised him that the next game would include some cruisers and torpedo boats.

My other gaming blogs